As I begin to reflect on having iPods in my classroom this year, I believe we have made many significant gains. I told my teaching partner, Sarah, I believe the iPods are another tool just like their pencil. I am going to continue to focus on three goals: creativity, collaboration and communication with the iPods.Those 3 C's have really guided my thinking.  As I look ahead to 2011, I am always thinking about how can I continue to focus on the 3 C's as well as allow my students to become more involved with their iPods. Here are some of the BIG ideas for the upcoming year.


First, I am going to have the students choose their favorite app and write about how they use the app in their learning. Also they will include one fun fact.  I am going to start a monthly feature on the blog in which the top two apps will be reviewed by the students. I am excited to learn about the apps from their perspectives. Also a few students have gone to the App Store and have made suggestions for different apps as well as songs they would like added to their iPods. Right now they are asking me to add some new songs that sing in their Spanish class which I plan on doing during the holidays.


Second I am going to have the students create another digital story but this time using an app called Storyrobe which is free.  This app allows the students to create a mobile digital story that includes images (both internet and photos that the students can take). This will be a new challenge because our iPods don't have a camera, so I am going to have them bring in photos and import them into their iPhoto Library on their iPod.  The students will be able to voice record their story which will be new because we have not recorded on their iPods yet.  Finally they will email their story to me and we will share them with the class as well as post them on our class web page so the parents can view them.


Next along with a lot of support from Mark, our TST,  I am going to learn about google docs so that I can begin to explore digital learning beyond the classroom. I plan on implementing this through my Life Science unit that I will be starting in February.  The focus is on comparing ecosystems, identify how organisms change and are affected by the change, finally the transfer of energy in food chains and food webs. If you have any additional links, picture books  (thanks Karen @ Literate Lives) or ideas on this topic please leave me a comment.


Lastly Mark and I will be preparing to present at the Dublin Lit Conference on Saturday, Feb. 26, 2011 at Dublin Coffman High School. This year professional speakers include Kelly Gallagher, Patrick Allen, Troy Hicks,and Christian Long.  Children's authors include Brian Pinkney, Amy Krouse Rosenthal, Wendy Mass and Loren Long.  Here is the link for the brochure.


My school goes through Dec. 22 then I will be on holiday break through the New Year. I am going to enjoy having my family home for the holidays and take a blogging break until after the New Year. One of the things I am thankful for is the opportunity to be on this journey in the blogging world.  Thanks for reading and coming along with me on this adventure.  Best wishes for a wonderful holiday season and an amazing New Year.  See you in 2011.
Posted by Maria at 8:59 AM No comments: 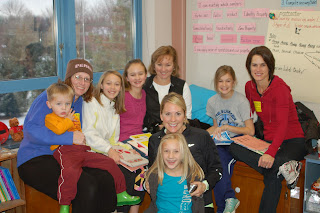 I believe pictures tell a story so here is our story as we celebrated the students becoming published authors this past Friday morning with their parents.  We celebrated by starting with their writer's noteobooks, the entire writing process and finally a published book!  And of course any celebration would not be complete without doughnuts and drinks!

Email ThisBlogThis!Share to TwitterShare to FacebookShare to Pinterest
Labels: authors

Last Saturday, I spent my morning at my favorite bookstore, Fundamentals talking to Tammy.  I love when I go into her store because she always has some great book suggestions but this time she also told me about some new games.  I always try and purchase my class a new word game for the holidays since we are starting the long days of indoor recess in Ohio. 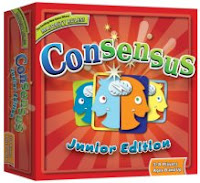 Her first choice is the award winning game Consensus (Junior Edition). This game has won numerous awards including Major Fun Award, Dr. Toy Winner Top 10, and 2009 Game of the Year Award. I am excited to wrap up this game because it reinforces parts of speech (nouns and verbs) as well as logical thinking.  It's also great for a classroom because up to 8 students can play the game.  The point of the game is lay out 10 noun cards on the game board and one adjective card. Each player chooses which noun is best described by the adjective secretly and places their vote-#1-10.  Which ever noun gets the most votes is the consensus and those students get to move their pawn ahead and the game ends with ten dots. 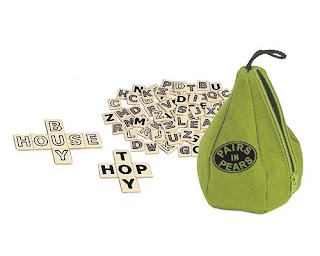 Tammy also suggested Pairs in Pears with a title like that how could I go wrong?  I was excited
to learn that it has four separate alphabets
that can be combined or used separately. I
love the idea of using this game in word
study to reinforce spelling patterns and allowing the students to have fun with words including practicing figurative language. Should be a huge hit for indoor recess this year.

Tammy also suggested a new book, because of mr. terupt,  that was just released in October by first time author Rob Buyea. Tammy was so excited to tell me that the story's setting is a fifth grade classroom and each chapter is written from the point of view of six students in Mr. Terupt's class.  There’s . . . Jessica, the new girl, smart and perceptive, who’s having a hard time fitting in; Alexia, a bully, your friend one second, your enemy the next;Peter, class prankster and troublemaker; Luke, the brain; Danielle, who never stands up for herself; shy Anna, whose home situation makes her an outcast; and Jeffrey, who hates school.  Mr. Terupt is in his first year of teaching and is a marvelous teacher because he learns about each of his students' home life and then handles many difficult situations with a sense of humor as well as many endearing conversations with the students both privately and within the class setting.  I actually am going to start the (dollar word) math game which Mr. Terupt used to hook his class into loving math after the holidays.

Email ThisBlogThis!Share to TwitterShare to FacebookShare to Pinterest
Labels: because of mr. terupt, Consensus, Fundamentals, Pairs in Pears 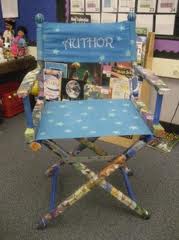 I have been working and "playing" on how to create links to share my students' Story Kit stories. If you hit the links for one and two and they don't work, sorry and I will try again.  Here is my best effort for story one and two.

Story one is an amazing story because she is wonderful writer to start with but the iPod allowed her such creativity with the illustrations both hand drawn and copied off the internet.  When she talked about her story, she loved the connection with Sherlock Holmes and creativity of the pig. Her story had amazing connections with our class read aloud Donavan's Word Jar and connections with our Life Science unit.

Story two is a creative fantasy story, and the setting was perfect since it was Halloween.  Story two's author does not really enjoy writing, and I would have to say he is hesitant at best to write a story. However, the iPod has unlocked writing for him.  I allowed him to compose the entire story on his iPod that was a HUGE release for me, but I was anxious to see if it would make a difference and it certainly did.  The coolest part for me is the wide variety of figurative language.  He used similes, idioms, alliteration, and onomatopoeia all of which had been the focus in our word study and poetry Friday.  His choice of vocabulary was also impressive because he used the online thesaurus to help him with his choice of words.  When we had his final writing conference, he was happiest about how he took a regular fish and changed him into a frightening, freaky, fat scuba diver.  Sometimes as a teacher you just have to throw in your bait and see what you catch.  This time I got a whopper of a good story.
Posted by Maria at 11:47 AM 2 comments: 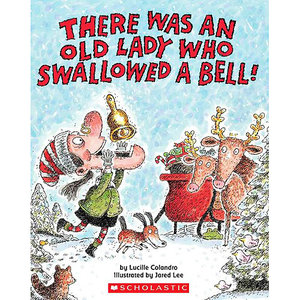 Yesterday I started my day with a Professional Development about Writing Workshop I was presenting along with a teammate.  One of the questions that comes up often is about mentor texts.  As we talked today about how important mentor texts are I realized that the message I need to continue to reinforce is that any text can be a mentor text depending on the focus of the mini lesson.

I found this book while shopping on black Friday with my daughter (what would shopping be without a trip to the bookstore). This book was brand new to me and as I read it I fell in love with the story. I plan on using it today for our word study.  In December, one of the areas of focus is going to be on parts of speech.  After a quick review of nouns, verbs, and adjectives I am going to read this story aloud.  As I read it I am going to have students collect those different parts of speech. It will be a great text because not only are there simple parts of speech (bell, red, walk) there are higher levels (pack: which is a noun and a verb) The conversations will be interesting to see if the students pick up on how one word could be different parts of speech depending on usage which is the focus for my mini lesson.

Along with parts of speech, I could also use this book for
*predictable text for choral reading
*connection with the other There Was an Old Lady books
*predictions (not until the end of the book do you know why she is swallowing everything
you will have to read the book to find out:  HO! HO! HO!)
*simple but wonderful word choice
*excellent and funny graphics that support the text

I plan on using this book many times in the month of December-check it out!
Posted by Maria at 1:00 AM No comments:

Email ThisBlogThis!Share to TwitterShare to FacebookShare to Pinterest
Labels: There Was An Old Lady
Newer Posts Older Posts Home
Subscribe to: Posts (Atom)

Maria
Welcome to 30 years of teaching. One of my goals is to build life long readers and writers. My passion is words! I love word play, searching for words and pushing my students to expand their vocabulary. There are roads that I haven't traveled down, but I am always ready to learn something new.