Wondering into Summer with our Little Buddies 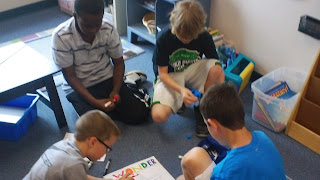 We are going to be spreading the wonder to our first grade buddies later this week.  We have had 5th grade math buddies this year, and it has been an amazing experience for the class as well as for me to grow professionally. 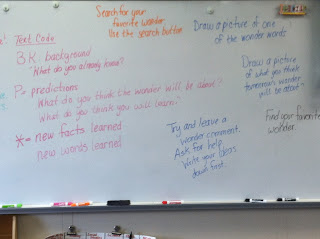 I decided we needed to give back to our buddies and spread the wonder at Wonderopolis.  Our entire school (K-5) knows about Wonderopolis because our librarian, Bill at Literate Lives starts every library class with the wonder of the day and conversation.  Our first grade friends have been wondering all year with their teacher, but we want to extend wondering into the summer. 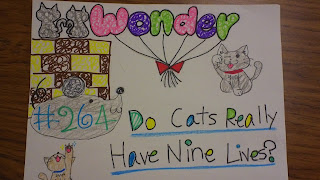 Once we brainstormed our favorite wonders, we set up a chart of sentence starters to help them start their thinking in the summer.  Next we extended their "Thinking Book"to "Wondering Book" really similar titles but we wanted to spruce up the covers. Hopefully our first grade friends will enjoy wondering over the summer and next year in 2nd grade I can check in with them to see their books. 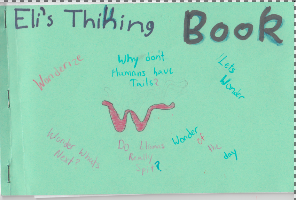 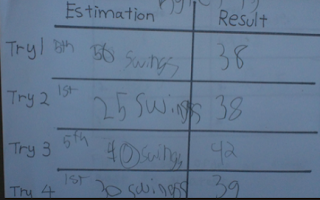 Do you ever have one of those days when you wonder why did it take me so many years to figure something out?  Let me rewind, all year we have had first grade math buddies because Shelly and I wanted authentic and relevant activities in math. All year Shelly took the lead and planned thoughtful and responsive activities to support math thinking. I sat in the back seat and waited for my supply list. The great thing about that was Shelly was ok with that, and I had the chance to observe an amazing teacher with huge strengths in math. Thanks Shelly for being an excellent role model for me. 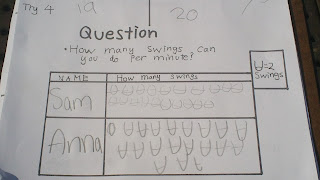 Fast forward, I told Shelly I wanted to organize our last little buddy math time and I knew two things: outdoors and bubbles.  Not much math was included in my thinking. Enter super smart 5th graders. I tossed out my two ideas, and they came up with four rotations including bubbles, an obstacle course, swings and the slide.  A perfect combination for fun, data, and little buddies. I did not create anything for our buddy day. The students created all the graphs for the day.  5th graders figured out the stations, the rules, the tool for collecting data and learned how to modify activities for first graders. Why did it take me so long to learn so many important lessons about little buddies?

And here is my favorite picture of the day - a constant reminder of the importance of stepping out and enjoying the little things in life like bubbles. 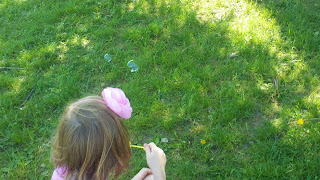