It's December and two more weeks until holiday break.  Trying to keep the students focused in math class has already been a challenge. On Monday without thinking  I said, "We are going to begin our new unit about shapes but in fifth grade we call them polygons." Student said:  "What if we forget to use that word?" I said, "Then we touch our nose as a secret signal to remind everyone."

Well,  does anyone want to guess how many times you say the word shape in Geometry?  Let's just say our whole class has really learned the word polygon including the teacher, but we're having fun. 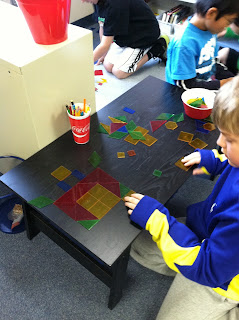 I had noticed a decrease in HW quality along with students not getting the correct answers, so I got out my polygons and if students completed their HW at 80% they are rewarded with some time to play with polygons.  It has been a real incentive to keep them focused on HW.  We also had some fun discussing the attributes of polygons using their own polygons especially when we compared and contrasted them.

We also enjoyed exploring Wonderopolis:  Why Does Pasta Come in so Many Shapes?  It was one of those wonders that didn't directly connect to math, but the students enjoyed learning about pasta.  A few students told me that they would feel much smarter the next time they ate spaghetti. 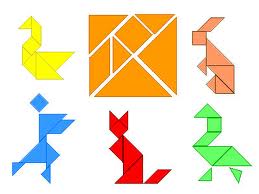 One of the areas that I have struggled this year in math:  Is what students can do when they understand the concepts, and I need to work with a small group for some reteaching.  I am frustrated with worksheets, so I have been searching, and I decided on tanagrams for this unit.  The students are super excited.  I gave each student their own set, and they had to build a square.  For some of them it happened the first day and for others it took 2-3 class times.  I then gave them a picture of a fox, but not the tanagram picture and they had to make the best fox possible.  We then hang all the foxes up and vote which one made the best fox - what a great challenge and so much better than a worksheet.  More later on their golf courses that they are designing..........

Maria
Welcome to 30 years of teaching. One of my goals is to build life long readers and writers. My passion is words! I love word play, searching for words and pushing my students to expand their vocabulary. There are roads that I haven't traveled down, but I am always ready to learn something new.